Well, it has been far far too long. I’ve been buried under my thesis (excerpts of which you can read on Words Without Borders here and here) which is inches away from being announce-ably forthcoming in full. So that’s exciting.

I’ve also been printing like a madwoman, making, among other cool things, these sweet postcards for Anomalous Press to hand out at AWP and display on the lovely Iowa Review table. 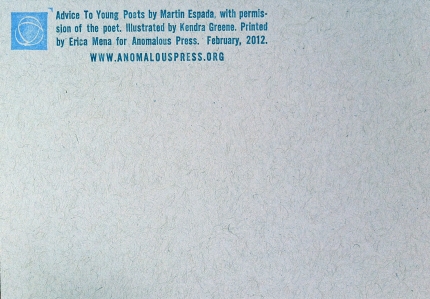 And wow, was AWP crazy this year. I wasn’t initially going to go, but then being only a few hours away driving, and getting to see all my conference-friends, and invited to a translator’s party, well…it was too good to resist. So I abandoned my responsibilities as a student and drove to Chicago and had a whirlwind three days. From dancing to early-90s hip-hop with Chad Post of Open Letter Books/Three Percent Blog and CJ Evans of the Center for the Art of Translation/Two Lines Journal (who has surprisingly awesome moves on the dance floor) to getting to hear Debra Di Blasi of Jaded Ibis Press talk about multi-modal literature, I had a wonderful conference experience.

But it was also really overwhelming. 10,000 writers, editors, academics, publishers, and spouses of the aforementioned all in the same space. I think there are a few things I’ve learned about conference attending over the last few years, and I’m going to crystallize them here.

1. Have a specific and limited agenda.

My first conference was ALTA in 2010, and I didn’t have any idea what it was going to be like. ALTA is a relatively small conference focused on literary translators, so a good intro to the conferencing experience. But I was still overwhelmed and confused, there were a lot of things I wanted to go to, and I also wanted to meet new people and hang out with friends, etc. It was hard to feel like I was getting what I wanted out of the experience. Then I went to MLA that same year, and talk about big and scary. But, I had a specific agenda at MLA: record the first five episodes of the Reading the World podcast. With that as a concrete agenda, I didn’t feel badly about missing several panels that looked potentially interesting, not going to all the parties and receptions I could have possibly gone to, and not seeing every single one of my friends who happened to be there. My first AWP was similar – I took responsibility for a table, and though I shared the sitting duties with other wonderful folks, I had a specific agenda. Be at the bookfair, hand out handmade broadsides. It was great because I just told people where to find me, and they came to me. And I got to meet a lot of new folks by sitting at the table. I went to only one panel, the last one of the conference, and thoroughly enjoyed it because I didn’t feel stressed about having missed other things happening. This AWP my agenda was to hang out with a specific friend and go to a specific party. It was accomplishable, and left time for a few other things like panels and wandering the bookfair, but in a limited and manageable way.

My takeaway: there will always be other conferences, so there’s no need to cram everything you might potentially do at the conference into this one. I get more out of what I’m doing when I’m not always thinking about the next thing, and that way I can let things unfold in a way that allows for great surprising things to happen, the real joy of conferences for me.

Ok, this may just be me, but every conference I’ve been to in the past three years I’ve lost my voice entirely by the third day. It’s all the loud talking in the bookfair, in bars, in the lobby, just always having to shout over others. I apparently have weak vocal cords (thanks, dad) so I absolutely must remember to do vocal chord exercises in the weeks leading up to the conference. There’s nothing worse than wanting to have a conversation with someone and having to hope they can read your lips because your voice sounds like a frog with a sore throat is lodged between your vocal chords. Maybe I do an inordinate amount of talking, but there it is.

Some conferences have off-site events, or planned excursions, but I don’t always find those things as exciting as I do the things I just randomly discover by wandering. I’m a city-girl through and through and one of my favorite activities is discovering a new city by exploring and getting a little lost. I set aside a few hours on my second day to do this with a friend, and we wandered in the rain up Michigan Ave. to the Chicago Cultural Center where we discovered two amazing art exhibits, both totally free and open to the public, in an exquisite building. It was a nice interlude in all the conference madness, and a good reminder that there are amazing artistic things happening outside of AWP. Plus, the exhibit Morbid Curiosity was totally inspiring. A victorian-style curio collection of art that has to do with skulls and skeletons. Really a stunning exhibit.

4. Don’t just talk about yourself.

Seems sort of obvious, but a few friends have asked how I can hold conversations with complete strangers, and the answer is usually don’t talk about yourself. Ask questions. Be interested. Repeat. I see so many people at the bookfair at AWP especially just going up to tables and trying to talk about their own work, which from the other side of the table gets pretty blurry pretty fast. If you’re looking to make meaningful connections with publishers, editors and writers you admire, talk about things you have in common, not just your own interests and work. The way you find those things out are by asking good questions, and listening carefully. I had some amazing interactions at this bookfair with a few publishers I really admire. And though I do have some work I’m looking to place, I’m much more concerned with building genuine relationships with people I think are doing awesome and interesting things.

P.S. – The same is true for having a good twitter feed. It’s all about community-building.

I got a bunch of cards, email addresses, and invitations to continue conversations after AWP. That’s what makes me excited about these conferences – the potential future relationships that I’m building. So it’s a good idea to do it right away. In the past, I’ve put it off feeling like I need to catch up on all the things I let lapse during my time at the conference. But now I’ve set aside the day after the conference ends for follow-up correspondance (and blogging, obviously). Otherwise it won’t get done.