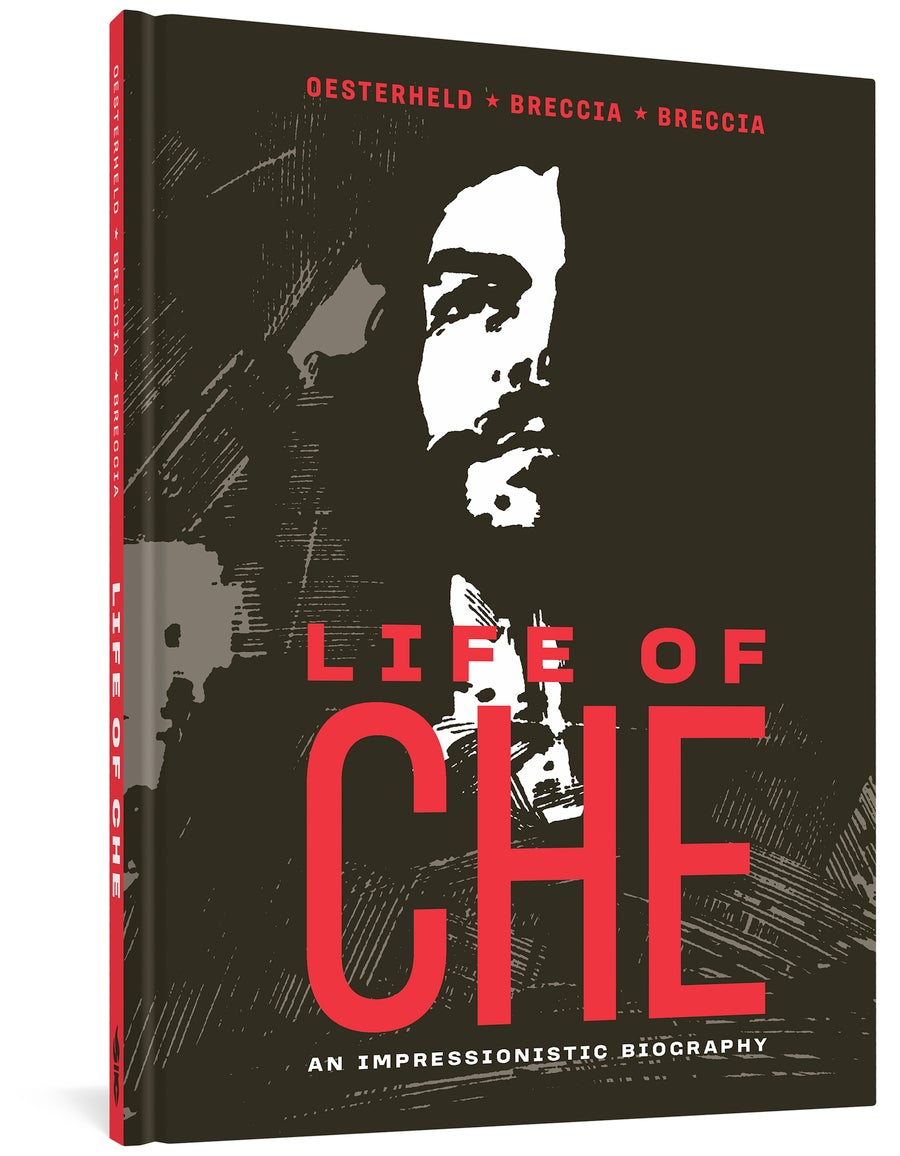 Life of Che is one of the most anticipated entries in Fantagraphics’ The Alberto Breccia Library. Originally released as part of a graphic biography series in January 1969, it came out in Argentina only a year after Ernesto “Che” Guevara had died and reached an audience beyond comics readers. In the 1970s, the military government raided its publisher, destroying the means to reprint the book. The comic was presumed to be lost to history, until a publisher in Spain restored it in 1987. It has never been translated into English until now. 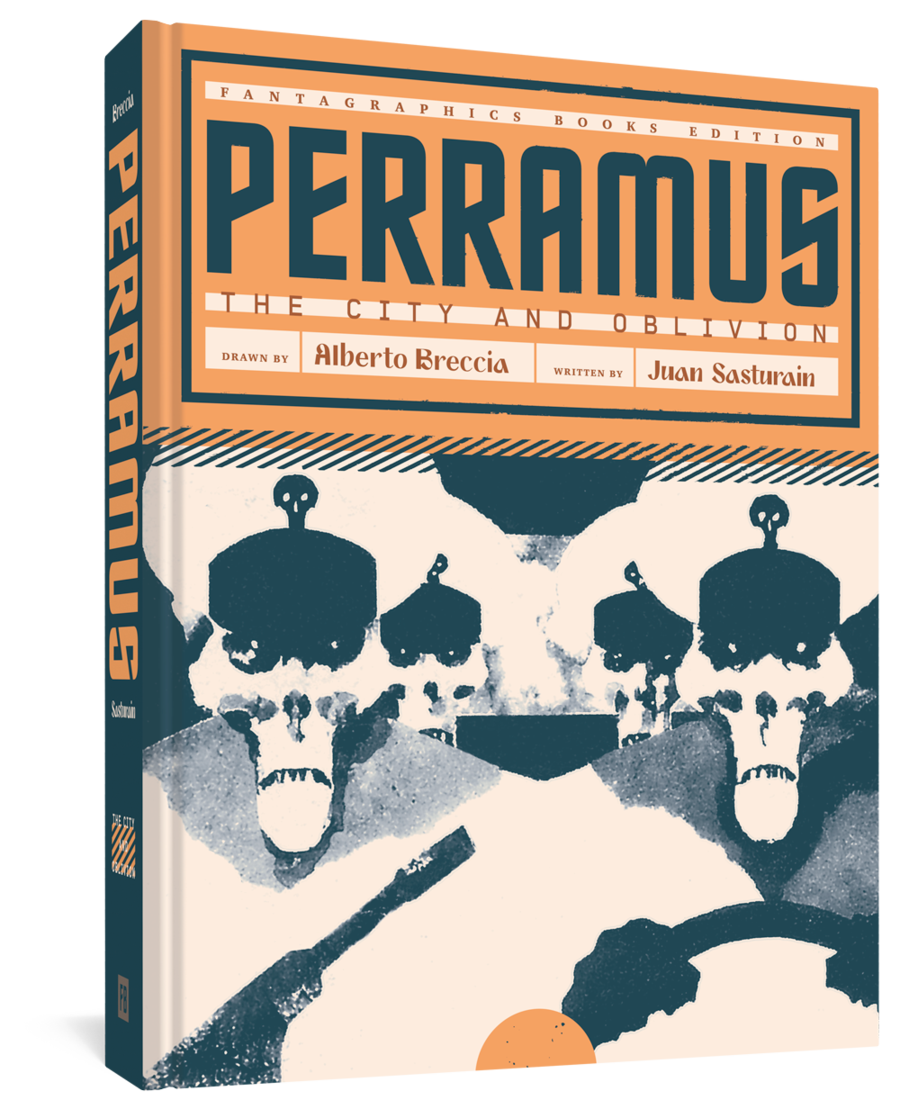 By Juan Sasturain and Alberto Breccia.

Fantagraphics collects the graphic novel Perramus — winner of an Amnesty International prize — in English for the first time.

This graphic novel follows the existential odyssey of a political dissident. When he voluntarily loses his memory, he’s dubbed “Perramus” from the brand of his raincoat. During his absurdist travels, he teams up with the gruff Cannelloni; a foreign aviator dubbed “The Enemy” by despot Mr. Whitesnow; and the blind author “Borges” (based on the real-life literary figure), who comes to be a guide. This motley crew journeys to outlandish locales where they encounter a variety of eccentric characters — including a director of trailers for films that will never exist; a guerilla force of circus folk, clowns, and puppeteers; a tin-pot dictator with a vast fortune built on an empire of excrement; and Ronald Reagan. This highly anticipated collection is an act of resistance in and of itself — it was created while Argentina’s military dictatorship was still in power. Perramus is a cartooning tour de force, with a revolutionary message that remains vital to this day.

This episodic graphic novel follows the journey of Mort Cinder, a man who rises from the grave each time he is killed. His travels through time, space, and the darkest corners of humanity are shown from the point of view of Ezra Winston, an antiquarian who becomes Mort’s companion. Alberto Breccia’s experimental chiaroscuro captures the expressive faces of hardened prisoners, shell-shocked soldiers, and grotesque grave robbers; his atmospheric stories take the reader to eerie cemeteries, ancient Babylonian tombs, and the treacherous waters of the Atlantic.

Presented in English for the first time, these horror-adventure tales are as chilling and accessible as they were half a century ago. Breccia, who is recognized as one of the most influential cartoonists in the world, created Mort Cinder between 1962–1964 in collaboration with the Argentine writer Héctor Oesterheld, best known in the U.S. for the award-winning The Eternaut. 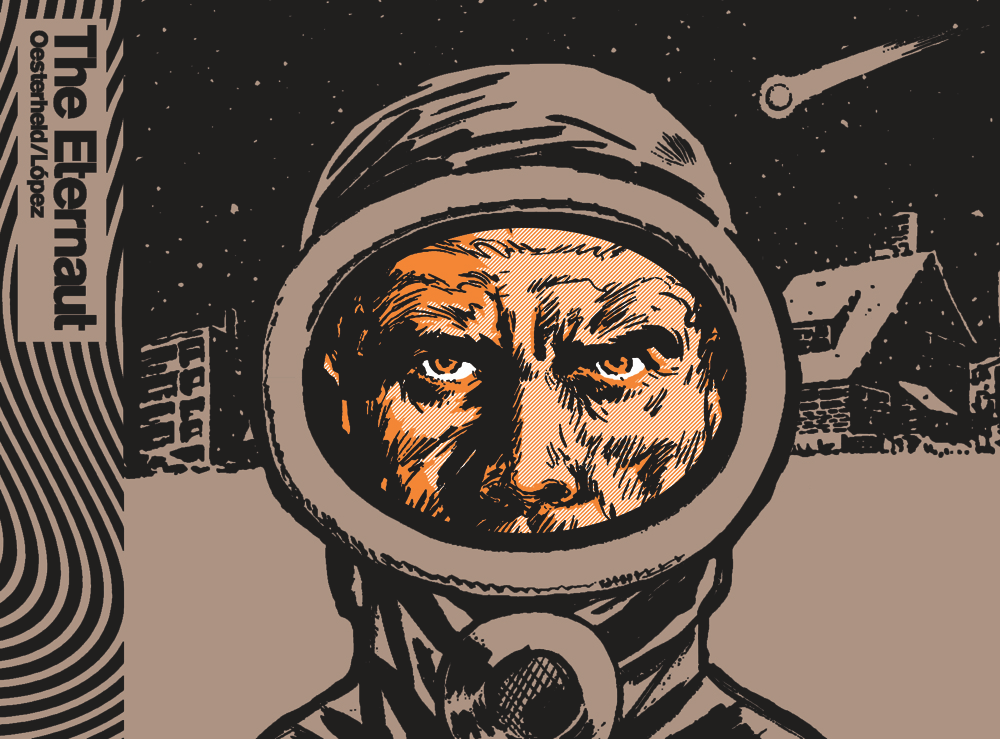 Fantagraphics is proud to publish, for the first time in English, a graphic novel so powerful its main character’s image (much like Che Guevara’s) has become a potent symbol of the endless struggle against oppression; “Juan Salvo” appears on walls and in subways throughout Latin America to this day. This seminal Argentinian science fiction graphic novel was originally released as a serial from 1957–59. Juan Salvo, its inimitable protagonist, along with his friend Professor Favalli and the tenacious metalworker Franco, face what appears to be a nuclear accident, but quickly turns out to be something much bigger than they imagined. Cold War tensions, aliens of all sizes, space—and time travel—this one has it all.

The Eternaut is also thinly disguised political allegory: its writer, Héctor Germán Oesterheld (HGO), because he was involved in groups who protested the military dictatorship, was “disappeared” and presumed dead in 1977. Classical artist Francisco Solano López (who had to flee Argentina for Spain) illustrated the book in a gritty, realistic style. This collaboration between two of the biggest names in Latin American comics is still powerful: the story of Juan Salvo, fighting to save Argentina and the world, lives on in sequels, retellings, and adaptations.

“Oesterheld and López’s Argentinian classic from the 1950s [is] newly translated by Mena with a deftness and energy befitting the Borgesian, literary quality of the narrative … Elsewhere, López’s vigorous and occasionally terrifying drawings bring us from one hair-raising moment to the next, one part R. Crumb, one part Goya, one part Edvard Munch. … These two stories, of course, point to a larger one: that of how we deal with the daily catastrophes and pitfalls of human existence, with or without extraterrestrials.” — The Boston Globe

“Oesterheld’s tale is an obvious allegory for resistance struggles of all kinds. … The characters are granted rich life by artist Francisco Solano López. … With this volume, Oesterheld’s masterwork may attract the attention it deserves in North America. Fantagraphics has gone all-out with a multilayered, gleaming binding that emphasizes this book’s significance and strangeness.” — NPR Books

Retired bank manager Emilio, suffering from Alzheimer’s, is taken to an assisted living home by his son. Confused and disoriented by his new surroundings, he finds unexpected support in his roommate Miguel, a brash rogue and overconfident ladies’ man. Together, they employ clever tricks to keep the doctors from noticing Emilio’s ongoing deterioration — and keep him from being transferred to the dreaded confinement of the top floor of the facility. (“Better to die than to end up there.”) Their determination to stay active as individuals and maintain their dignity culminates in a nighttime escape and joyride and adds a dash of adventure to their otherwise tedious day-to-day routine. While for some residents, the home is a place to wind down their lives, for Emilio and Miguel it becomes, in a quirky way, a new beginning.

With echoes of One Flew Over the Cuckoo’s Nest and Cocoon, Paco Roca squarely addresses the fears of growing old and isolated in a work infused with remarkable humor, humanity, and sensitivity. Wrinkles was adapted into an award-winning international animated film in 2011, with Martin Sheen and Matthew Modine voicing the main characters in the English version. Wrinkles swept all the top Spanish comics awards, including the National Comics Award and Best Spanish Comic Strip and won Italy’s Gran Guinigi Award. Paco Roca won the Goya Award for his screenplay adaptation for the animated film, in addition to other international awards for his work as a comics artist.

“This collection is sure to keep any comics fan up-to-date on one of the most compelling cartooning traditions in Europe.” — Atomic Books

“Anthologies like this are a reminder of how much excellent stuff there is out there that a lot of us have never come across. I’m so glad to be able to sample a little of such a lively comics scene, and discover so many great creators. Thank you, Fantagraphics!” — Orbital Comics

“Spanish Fever is a laudable effort to introduce North American readers to another world of comics creators from across the ocean. … It’s an eclectic stew that comes together agreeably, making a good case for the vibrancy of the Spanish comics scene.” — The Comics Journal

Fantagraphics Books is proud to introduce American readers to the latest generation of Spanish cartoonists in Spanish Fever, an anthology of contemporary comics from Spain showcasing the best of the new wave of art comics hailing from a country with one of the strongest cartoon traditions in Europe. Spanish comics creators have been known internationally since the days of stars like José González and Esteban Maroto through the new rising talents of David Aja and Juanjo Guarnido. Still, too few American comics aficionados know that right now Spain enjoys a thriving scene of art comics, mini comics, and graphic novels populated by artists like Joan Cornellà (Mox Nox) or Max (Vapor) which, in addition to being published for American readers by Fantagraphics, are finding audiences throughout the world. With its panoramic view of the contemporary Spanish comics scene, Spanish Fever is a cartoon parade which includes the work of masters of the form such as Paco Roca, Miguel Gallardo, David Rubín and Miguel Ángel Martín as well as newcomers like José Domingo, Anna Galvañ, Álvaro Ortiz and Sergi Puyol — more than 30 artists working on the cutting edge of the comics form.

The Ladies-in-Waiting (Fantagraphics, 2017).
By Santiago Garcia and Javier Olivares.

“Aspiration, frustration, chance: There’s nothing archaic about this tale except the neck ruffs.” — NPR Books

“The Ladies-in-Waiting is a visually vibrant piece, highly entertaining and engaging, dispensing with all brows (low or high) in order to create a new work of art, done with deep knowledge and appreciation of the subject, all building up to a thoroughly wonderful reading experience. ” — Bookgasm

“The art in this book is stunning. Olivares’s art is busy in this work, trying to capture Velázquez’s state of mind of as he fervently looks for a way to capture the world as yet unknown to painting.” — Scroll.in

In 1656, Diego Velázquez, leading figure in the Spanish Golden Age of painting, created one of the most enigmatic works in the history of art: Las Meninas (The Ladies-in-Waiting). This graphic novel, written and drawn by two of Spain’s most sophisticated comics creators, examines its legacy as one of the first paintings to explore the relationship among the viewer, reality, and unreality. (It guest stars Cano, Salvador Dalí, Zurbarán, and many others.) Olivares’s art moves from clear line to expressionistic; from pen nib to brush stokes; from one color palette to another, as The Ladies-in-Waiting uses fiction to explore the ties among artists and patrons, the past and the present, institutions and audiences, creators and creativity. Their combined efforts have garnered not only international comics prizes, but the equivalent of the National Book Award in Spain, where the book has been a commercial and critical sensation.

“The Christmas Tree” by Mabel Cuesta (Words Without Borders, June 2012).

“From the Grave of my Grave” by José María Lima (Words Without Borders, November 2011).

excerpt from “Tales of the Autumn in Gerona” from Tres by Roberto Bolaño (Words Without Borders, March 2010).