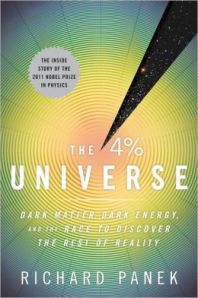 I have an amateur’s interest in physics and astronomy. I once took a class (and still have the course book) called Physics for Poets. I’m ok but not brilliant at math, but love the abstract thinking, the scientific deduction and inference, of rigorous attempts to understand the world (at whatever scale). This is the kind of book that is written for someone like me – an understanding, or at least an ability to understand, some pretty complex theoretical concepts if explained well, and without too much math.

This book routinely blew my mind. Over and over I had to put it down, walk away, and think about what I had just been told. Some of it is the enormity of scale. Billions of galaxies, hundreds of millions of light-years apart, in an observable universe billions of years old. It’s hard, even for a poet, to get there, to not merely accept but really imagine it. And some of it is the enormity of the implications of these theories about the universe. The analogy Panek makes at the beginning of the book to Copernicus and Galileo is apt: the scientific revolution he describes changes not just what we understand, but our capacity to understand the universe in which we live. And that change is deceptively simple: we can’t see most of what’s out there. Not only can we not see it, we mostly don’t even know what kind of affects to look for. What is unknown, what is dark, is so much more than what is known.

Last summer I read a book that had been published in the 80s called Darkness at Night which similarly explored our changing conception of the universe through the exploration of centuries of attempts to answer a seemingly (deceptively) simple question: Why is the night sky dark? Because it shouldn’t be, it should be suffused with light. It’s darkness is a blessing – without it life couldn’t survive. It was a fascinating accounting of the changing scientific understanding of our scale in the universe. And I longed for an update, something covering the thirty years since it was published. This book was exactly that.

Maybe this is a tad romantic of me, but I think here is where poetry can participate interestingly. Or art more generally. To explore and expand imaginative capacity.

This book makes complex revolutions of scientific thought comprehensible to a layperson, but beyond that it provokes the fascinating questions that engage people in these scientific pursuits in the first place. While providing substantial experimental and mathematical detail about these explorations, it makes sure to explain what the point of measuring a single ping hundreds of miles below the surface of the earth is. Why people devote enormous resources to the pursuit of these sciences.

Every now and then I got lost with the circuitous story-telling; bouncing around in narrative time, while trying to keep track of a huge cast of players, and an ever-growing horde of acronyms for institutions, teams, research projects, telescopes, etc. I longed for an index of acronyms and names. I wished it weren’t quite so cliffhanger-y at the end of every chapter, that the reveal had come earlier and with less build up but more exploration after the fact. But those are very minor flaws in an exceptional work.