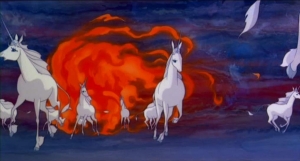 AWP, the largest writers’ gathering known to man, is in Seattle this year. Sometime next week, about 10,000 writers, editors, publishers, MFA program representatives, and essentially anyone who things they can earn a living working with literature in some capacity will be descending on Seattle. Like a herd of unicorns running into the sea to escape the red bull.

I came out a week early, to visit family and friends, and generally enjoy the awesomeness of Seattle before it becomes an anxiety-ridden madhouse. There are so many articles out there already about making the most of the madness, surviving the conference, etc. (Roxane Gay’s is maybe the best.) This is not one of those. I’ve been to AWP for the last four years in a row, I have no advice worth sharing. My strategy in all the previous years has been bookfair-only.

Like many writers I’m an introvert, in the clinical sense, in that interacting with people, or being in large groups is incredibly draining. I get a headache about two hours in, start getting adrenaline-shaky about an hour after that, and then the migraine, sets in. A full day at the bookfair does this every time. But what I realized is that this year might be worse.

I’m happy to have been invited to be on two panels. Sad that they’re on the same day, one right after the other. And then the reading Drunken Boat is hosting (I’m Managing Editor, so definitely need to be there, and am pretty excited to hear all the readers read) and the reading I’m part of are actually overlapping, and on the same day. I couldn’t imagine a more difficult day if I tried. This seems unimaginably harder than the limited interactions of the bookfair…

Anyway, AWP blah blah blah. This is actually meant to be about my strange experience getting here. I flew, not that strange, but what was was running into a friend from middle school who I haven’t seen since then, essentially. She was traveling with her two young children, and we spent a good amount of the flight catching up. It was a strange, nice surprise.

During a lull in our conversation on the plane I ventured back to use the restroom. Because two girls had decided they desperately needed to tart themselves up in one of the bathrooms, there was a long line, and so I stood in the back with the flight attendants to be out of the way of people coming and going from the other bathroom. Naturally, one of the flight attendant wanted to chat. He started by complimenting my boots. Thanks. Then my unicorn necklace. Thanks again. I’m not all that social when I don’t have to be, and this guy was throwing off some seriously weird vibes.

There was another passenger back there, and man about my age, and more of less of my demographic – visibly liberal, educated, etc. As soon as I got drawn in, he shot me a couple of “WTF” glances, because the next statement out of this flight attendant’s mouth was “You know they recently found a unicorn horn.” I laughed, assuming it was a joke. “I mean, so many species go exctinct…” he said. “It was probably a narwhal…” I started, before he cut me off talking about how so many species went extinct, and there was proof that unicorns were real. Ok.

Other passenger dude left at that point, but I still had to wait for the bathroom. I don’t even remember how he transitioned but the next thing out of his mouth was about how New York City was a socialist paradise communist haven. “Sounds great to me!” I inserted, hoping he would just stop. Oh, but no, then he started going on about lazy welfare people and Obama, and then it came out that he had moved to Florida where he currently lived (and apparently swallowed hook line and sinker all the Fox-news bullshit out there). Sigh.

This is when it got really good. Another passenger, a big townie kind of guy wearing a Red Sox shirt, started talking about how many people (implied: brown-skinned) in Massachusetts just took advantage of welfare and lived off the system and…. well, you know the whole bullshit-y fact-less spiel. The flight attendant (brown-skinned, with an accent I couldn’t place) joined in. Insanity.

Finally, I extricated myself when townie-passenger started talking about how all the good doctors in Canada had come to the U.S. because they didn’t like socialized medicine, and it was true because he’d read it in a newspaper. I thought I wouldn’t call The Herald a news-anything, and said “I need to leave this conversation before I say something I regret.” and walked away. Without having used the bathroom.

Now I don’t assume everyone shares my politics. I’m extremely liberal, and I recognize that debate and conversation makes an educated populist stronger and better. But I just can’t debate with people who aren’t using logic. Who believe that just because someone says something on TV or in a newspaper it must be true, without questioning the source, the motivations, the finances behind it. Who believe that unicorns really existed. 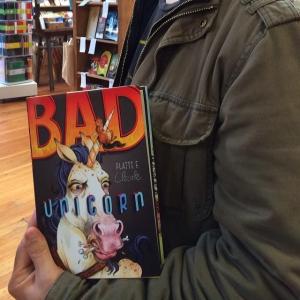 This is already a long post, but I just want to end on unicorns. I’m a big fan, have been for a long time. I wear a unicorn necklace almost every day. The unicorn was my father’s and when I was little I played with it, and wanted to have it. “When you’re old enough,” he always said. And then he gave it to me on my 21st birthday. I like that unicorns are the emblem of a particular internet-based group of atheists. I like that unicorns are cheesy and fantastical, and a little nerdy and girly.

And Seattle has always been a city of unicorns for me. The last two times I’ve been here I’ve been especially attuned to them, finding several around the city on any given day. Today, my first day in Seattle of this trip, was no exception. We’ve found three so far: one on the cover of a book at Elliot Bay, and two (one on a flask, one on a t-shirt with a cob of corn instead of a horn) at store in Capitol Hill called Retail Therapy.

I’m looking forward to seeing if the unicorns will make an appearance at AWP. So listen, if you see any at (or around) AWP, pic + #unicorn #AWP14 please! I’ll be keeping an eye out…